# (a) Describe the stages of regeneration of salamander limb

Salamanders (amphibians) have the spectacular power of regeneration. They can replace the last part of a limb. Limb regeneration in salamander occurs in two major steps. First, adult cells dedifferentiate into progenitor cells which will replace the tissues they are derived from. Second, these progenitor cells then proliferate & differentiate until they have completely replaced the missing structure. 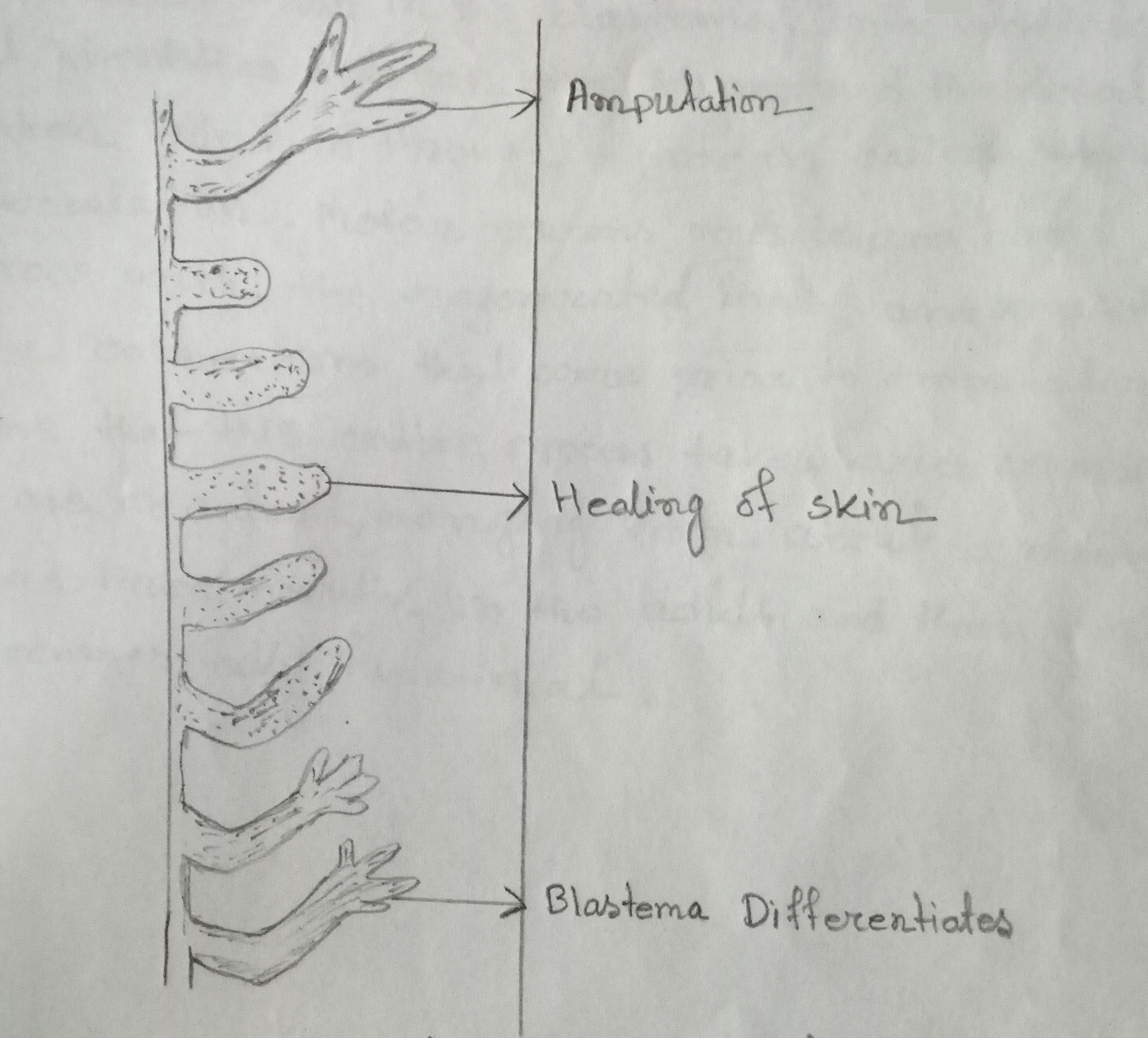 After amputation or removal of tissues, the epidermis migrates to cover the stump in 1-2 hours, forming a structure called the wound epithelium (WE). Epidermal cells continue to migrate over the WE, resulting in a thickened, specialized signaling center called the apical epidermal cap (AEC). Over the next several days there are changes underlying stump tissues that result in the formation of a blastema (a mass of dedifferentiated proliferating cells). As the blastema forms, pattern formation genes such as Hox A & Hox D are activated as they were when the limb was formed in the embryo. The positional identity of the distal tip of the limb is formed first in the blastema. Intermediate positional identities between the stump & the distal tip are then filled in through a process called intercalation. Motor neurons, muscle & blood vessels grow with the regenerated limb, & re-establish the connections that were prior to amputation. The time that this entire process takes varies according to the age of the animal, ranging from about a month to around three months in the adult & then the limb becomes fully functional.

# b) The role of proto-oncogenes in the induction of cancer

A set of genes that regulate cell growth & differentiation are called proto-oncogenes & their mutated versions that can cause cancer are called oncogenes.

Proto-oncogenes are normal genes present in all organisms & appear to be highly conserved in the course of evolution. They have been isolated in species ranging from yeast to highly evolved vertebrates including human being. This high degree of conservation implies their crucial role in the cell. Genes homologous to cellular proto-oncogenes are found in retroviruses known to cause cancer in various animal species. These viruses transform cells either by inserting their oncogene in the host genome or by being present in multiple copies in the host cell. It is thought that the retroviruses picked up these oncogenes from metazoan cells they infected.

Some of the possible ways in which proto-oncogenes are converted into oncogenes, these ways are:-

(i) A mutation may occur in the gene which becomes an oncogene. This oncogene encodes for a hyperactive protein different from normal protein.

(ii) An error in DNA replication or recombination can make several copies of the proto-oncogene. In which case, much more than normal amounts of the protein may be produced 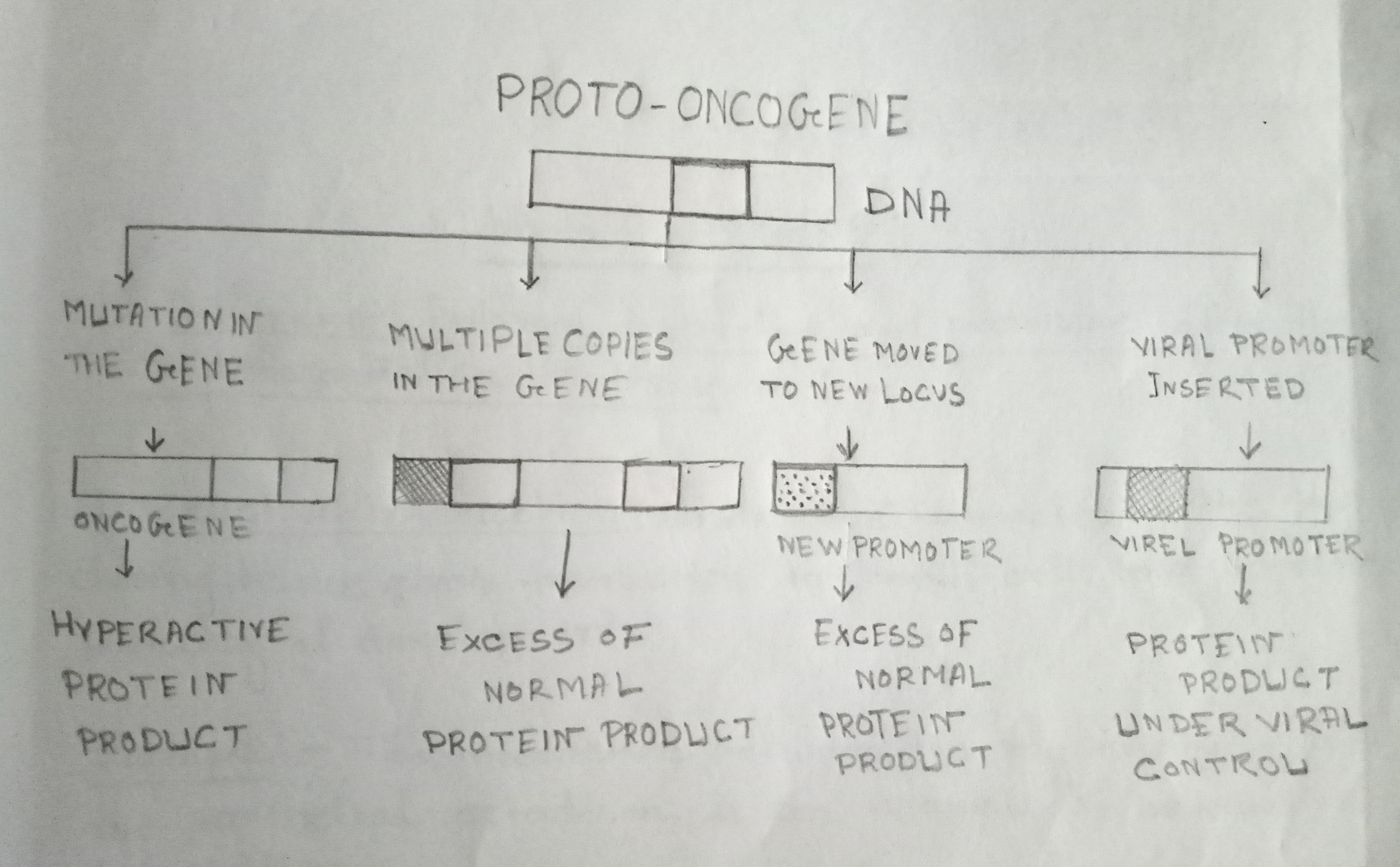 (iii) The proto-oncogenes may be moved from its original position to a new position in the cell's DNA. At the new site, it would be under the control of a new promoter or some other genetic control. The proto-oncogene e-myc comes under the influence of immunoglobin gene promoter.

(iv) A new promoter can be inserted into the cell by a viral infection. This could deregulate the proto-oncogene message placing it under viral control.

← Describe the following briefly-Role of morphogenetic field in development of eye, Role of prothoracic gland in insect metamorphosis Describe with appropriate examples the role of environment in the determination of sex →