# a)Discuss the nature & functions of estrogens in mammals.

The functions of estrogens in mammals (i) Tissue growth: The most general effect of the estrogens is to promote tissue growth. It is more pronounced in the accessory sex tissues. Estrogens stimulate cell division in the deeper parts of the skin & cause a more rapid replacement of the outer cornified layers of the skin.

(iii) Sexual activity: In mammals, sexual receptivity or heat coincides with a period during which the ovaries are secreting a lot of estrogens. Estrogens probably act through the central nervous system to condition the psychic manifestations such as increased spontaneous activity, sexual receptivity etc.

# b) With the help of a diagram, discuss the formation & secretion of amino acid based hormones.

Hormones based on amino acids are packaged in membrane bound vesicles that are later liberated in extracellular space of the cells. The secretion of amino acid based hormones is by the process of exocytosis. Hormones are released from the endocrine gland. It is controlled by nervous, hormonal or metabolic stimuli which also control the rate of release into the bloodstream. And neurotransmitters, Ca^2+ seems to play an important role in the release of hormones. The secretion is not random. This may be circadian or seasonal or periodical. Some hormones like the thyroxine are secreted continuously by the thyroid gland. The duration of hormone in the bloodstream is indicated by its 'half-life' which varies from a few seconds to almost a week depending on the hormone. The hormone is deactivated in the liver & in the target tissue that breaks down the hormone, or the hormone may be lost through the kidneys. 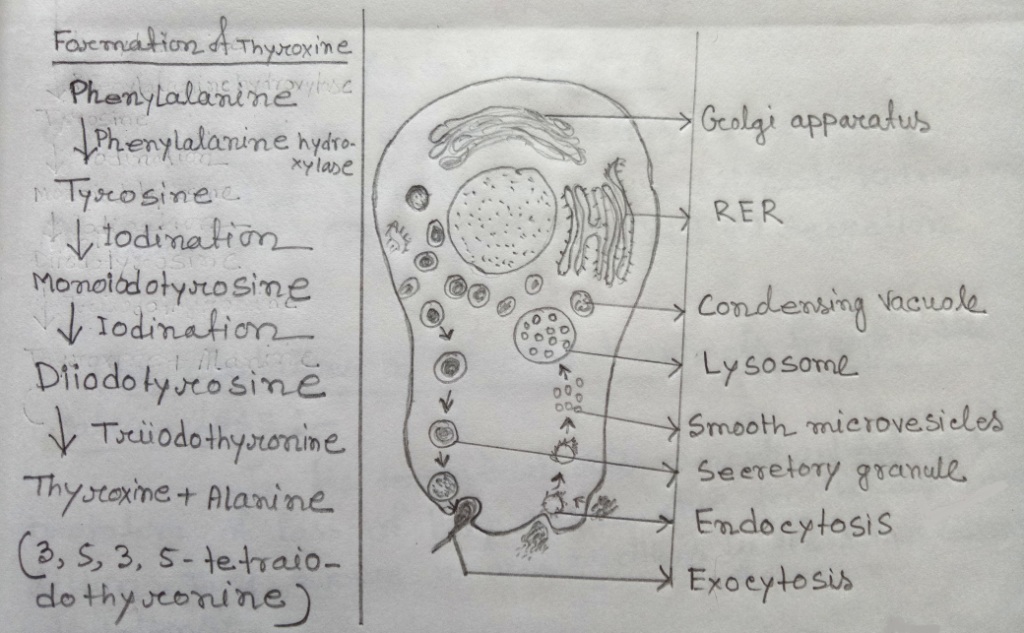 Fig: Formation & secretion of amino acid based hormones. After their formation in the Golgi apparatus, secretory vesicles are transported to the site of release. After the release of the hormone by exocytosis, the new vesicles may form by process of endocytosis

The hormones are bound to the protein molecules in the blood plasma forming aggregates. This prevents a) the hormones from being excreted out of the body via the kidney, b) rapid destruction of hormones by the enzyme. Hormone-protein aggregate is a source of slow release of hormones. The slow release of hormones occurs because the amount of hormone bound to the plasma protein is always in equilibrium with a small amount of free hormone. Receptor molecules have a greater affinity for hormone than the protein molecules in the plasma. So, free hormones tend to bind to the receptors shifting equilibrium & more hormone dissociates from the plasma proteins. Because free hormone is also broken down continually by the action of enzymes, a steady trickle of hormone is maintained.