Three processes in bacteria can transfer the genetic material from one cell to another:

(i) Transformation
In molecular biology, the transformation is the genetic alteration of a cell resulting from the direct uptake, incorporation & expression of exogenous genetic material (exogenous DNA) from its surroundings & taken up through the cell membranes. Transformation occurs naturally in some species of bacteria, but it can also be affected by artificial means in other cells. For the transformation to happen, bacteria must be in a state of competence, which might occur as a time-limited response to environmental conditions such as starvation & cell density.

Transformation is one of the processes by which exogenous genetic material may be introduced into a bacterial cell, the other two beings conjugation & transduction. 'Transformation' may also be used to describe the insertion of new genetic material into nonbacterial cells, including animal & plant cells, however, because, transformation has a special meaning in relation to animal cells, indicating progression to a cancerous state, the term should be avoided for animal cells when describing introduction of exogenous genetic material. The introduction of foreign DNA into eukaryotic cells is often called 'transfection'.

During the process of transformation, the two strands of a double-stranded DNA that enter into the bacterium, one strand is digested by a nuclease that is contained in the bacterial cell membrane. The other single strand in some way is protected from the nuclease attack. The single DNA strand, once inside the cell, causes the local unwinding of the recipient DNA & invades it. 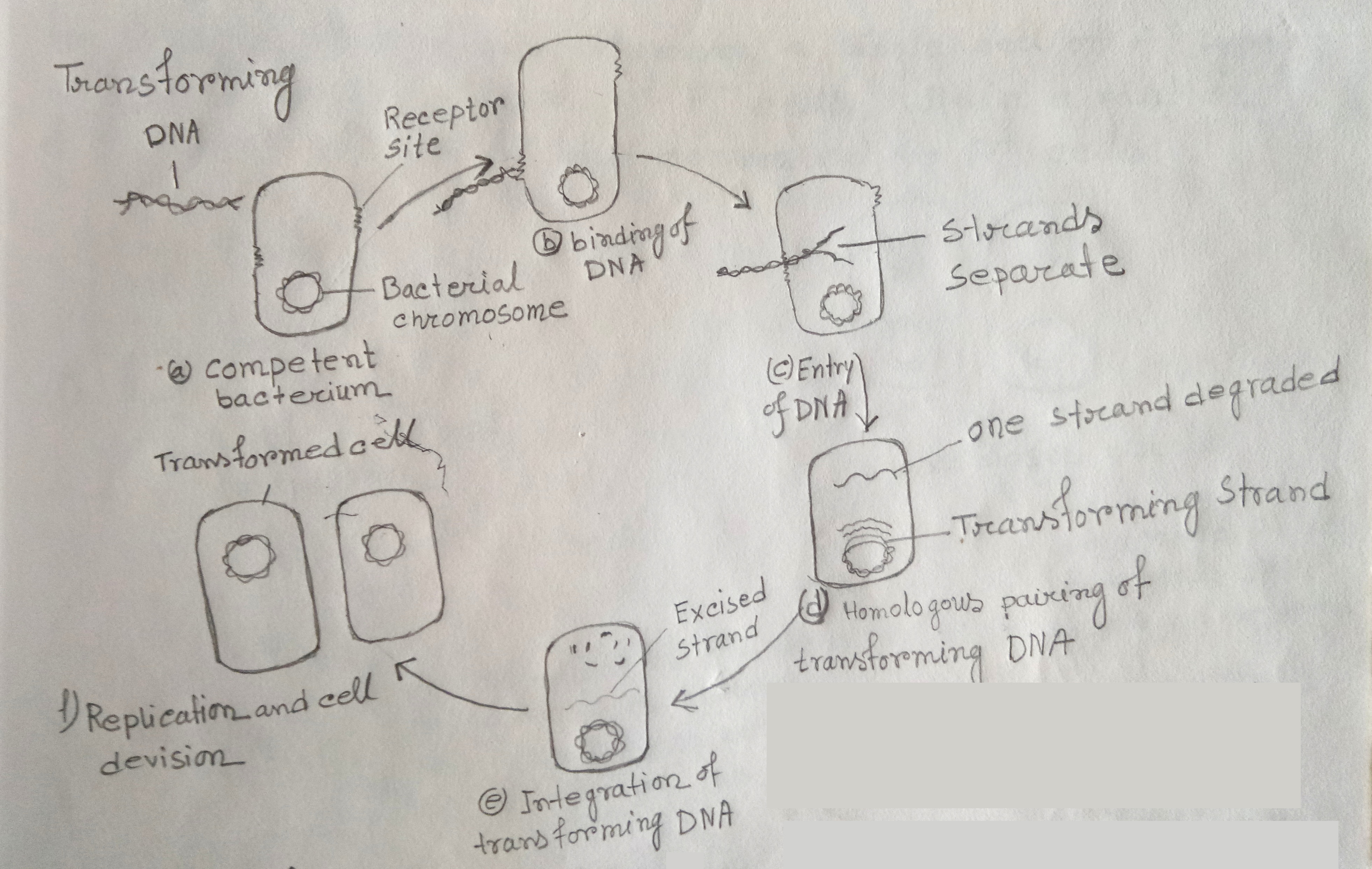 (ii) Conjugation
Conjugation could be defined as the temporary fusion of two single called organisms for the transfer of genetic information from one to another.

In conjugation, there is a physical contact between two bacteria & the unidirectional flow of genetic material occurs through the conjugation canal. Bacteria with fertility factor known as F act as donors during conjugation & transfer the genetic material to F- bacteria. F factor is shown to be a circular self-replicating plasmid containing 6*10^4 nucleotides. F plasmids are capable of replicating independently of the main chromosome. The genes in plasmid DNA code for fibrous pili proteins.Whenever a single cell of F+ type is present in a pop[ulation of F- cells, within a matter of few hours all the F- are converted to F+ cells. 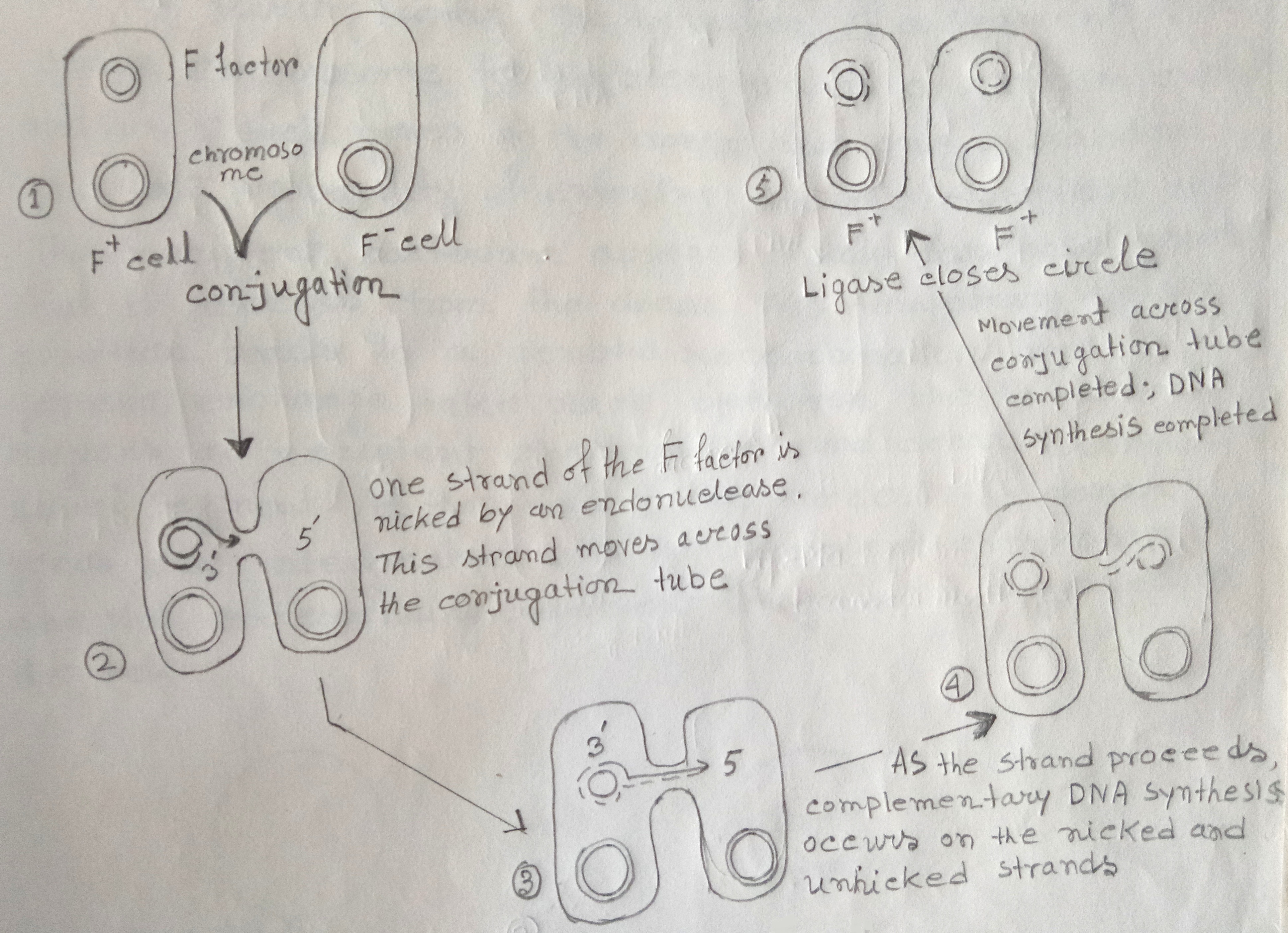 Fig: The transfer of FDNA to F- cell

During the process of bacterial conjugation, after the formation of a conjugation tube between F+ & F- cells, a copy of the plasmid DNA moves to F- cell converting it to F+. At the end of conjugation, every recipient cell becomes a F+ cell thereby showing the transfer of F factor through the conjugation tube during each mating. 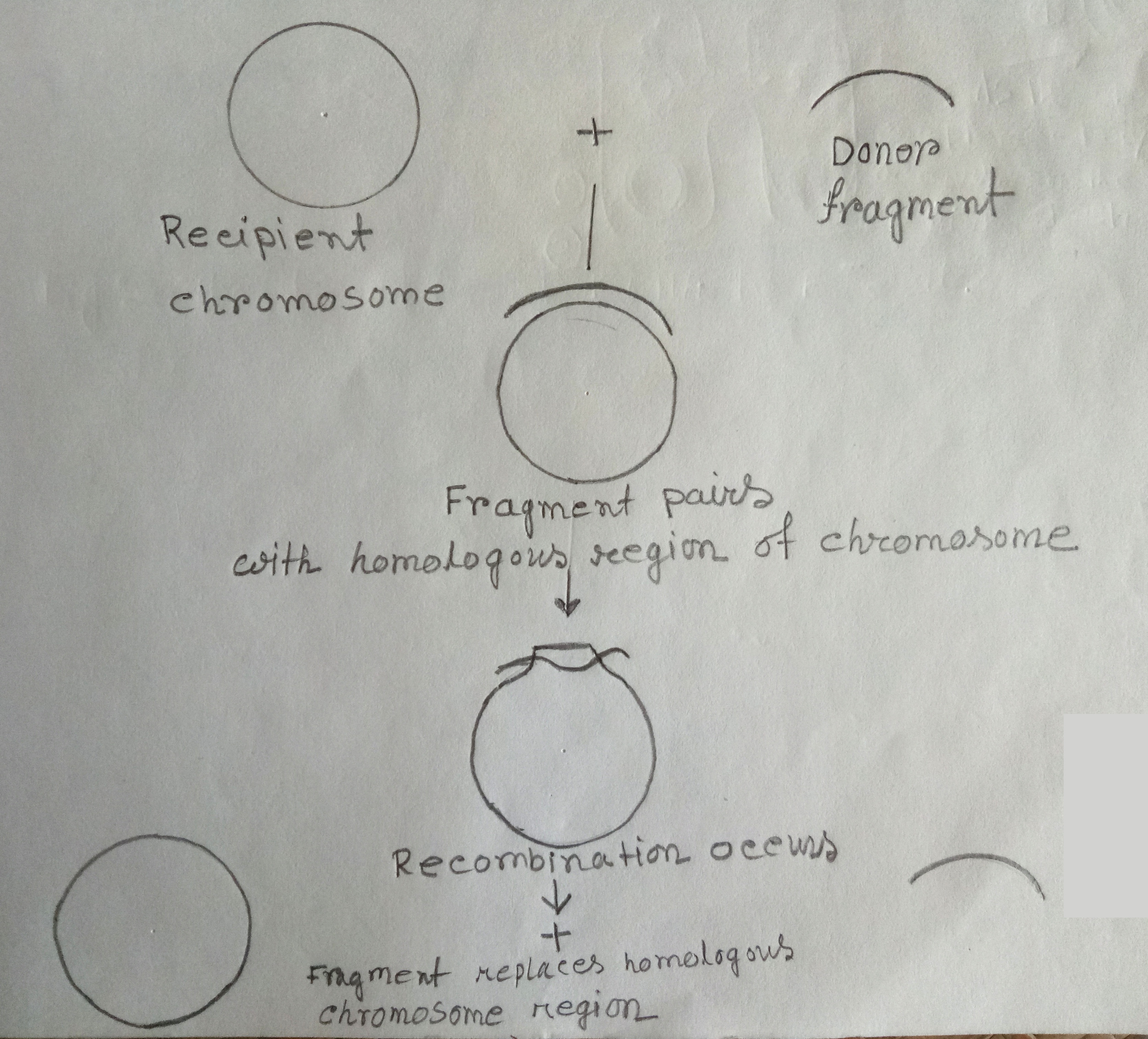