# Detail the Watson & Crick model of DNA structure. How did it fit in the data provided by Chargaff?

Watson & Crick model of DNA structure The discovery of the double helix by James Watson & Francis Crick at Cambridge, in 1953, was one of the great deductive triumphs in the history of science, & it has influenced every aspect of molecular genetics, indeed of biology as a whole. They based their model on the observation of x-ray diffraction studies & on chemical analysis. DNA is a basic molecule found in the cells. The total quantity of DNA in eukaryotic cells is much higher than in procaryotic cells.

According to the double helix model, two polynucleotide chains constitute the double helix. These two chains are coiled about one another in a spiral with sugar-phosphate backbones on the outside & bases on the inside. Each polynucleotide chain is made up of nucleotides arranged in a sequence & linked together by phosphodiester bonds, joining adjacent deoxyribose moieties. The two polynucleotide strands are held together in their helical configuration by hydrogen bonding between the bases of the opposite strands, the resulting base pairs being stacked between the two chains perpendicular to the axis of the molecule like the steps of a spiral staircase. The base pairing is specific. That is, adenine is always paired with thymine & guanine is always paired with cytosine. Thus all base pairs consist of one purine & one pyrimidine. The specificity of base pairing results from the hydrogen-bonding capacities of bases in their normal configurations. Adenine & thymine form two hydrogen bonds & guanine & cytosine form three hydrogen bonds. 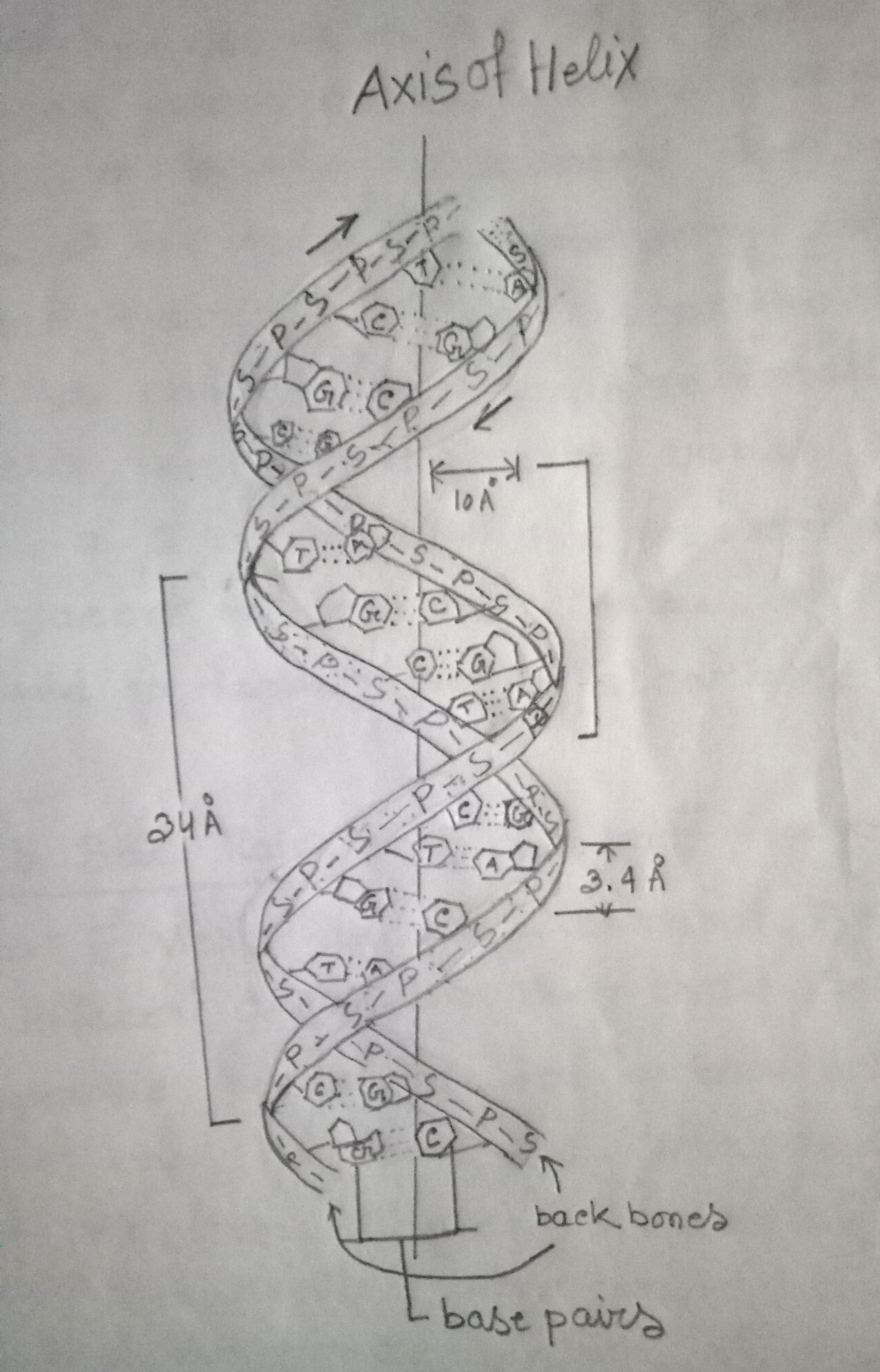 The distance between the backbones is 20A° & each base pair is 3.4A° apart. The orientation of the base rotates with the rotation of the double helix, each base pair being offset by 36° from the adjacent ones. Thus a 360-degree rotation of the helix occurs every 10 base pairs or every 34A°. There are two grooves, a major groove & a minor groove, bound by the sugar-phosphate backbones. The sugar-phosphate backbones of the two complementary strands are antiparallel; that is, they have opposite chemical polarity. As one moves unidirectionally along a DNA double helix, the phosphodiester bonds in one strand go from a 3 prime carbon of one nucleotide to a 5 prime carbon of the adjacent nucleotide, whereas of the complementary strand go from a 5 prime carbon to a 3 prime carbon.