The relationship of oxygen carrying capacity to surrounding oxygen concentration can be shown graphically by oxygen dissociation curves.

Comparison between the oxygen dissociation curves of hemoglobin & myoglobin 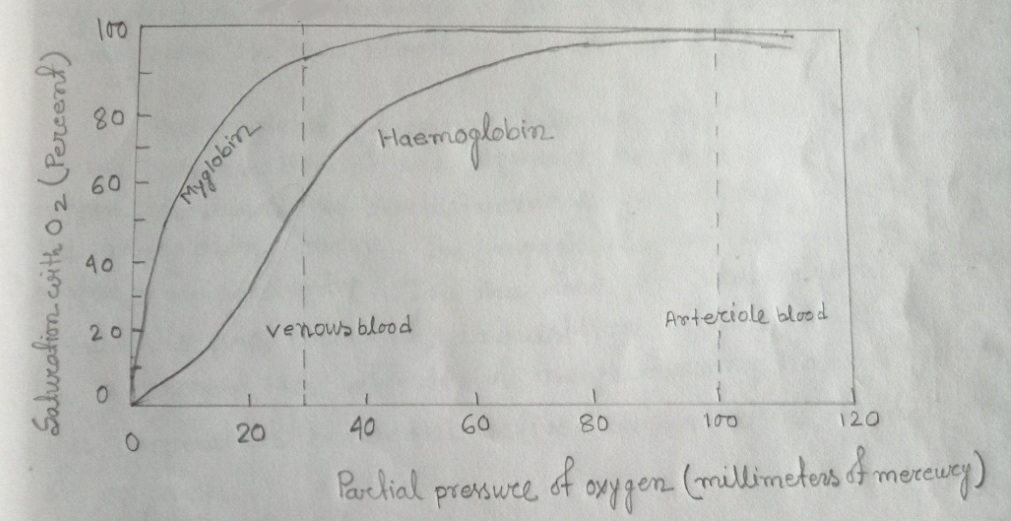 Fig: A comparison of the dissociation curves for hemoglobin & for myoglobin

The oxygen dissociation curve of hemoglobin is S-shaped or a sigmoid curve. This curve shows how hemoglobin's binding capacity depends on the partial pressure of oxygen & how hemoglobin acts as a carrier of oxygen. Also, the curve shows that changes in partial pressure (Po2) values from arterial to venous blood result in 97-75 = 22% unloading when resting. During exercise, this unloading is increased to 39%.

And the oxygen dissociation curve of myoglobin is rectangular. Myoglobin acts as a middleman in the transfer of oxygen from the blood to mitochondria within muscle cells. These curves indicate that the compound remains oxygenated until quite low levels of Po2 in the surrounding fluids is reached. According to the curves, at 20 mm Hg, the myoglobin in the muscles is above 80% saturated but the hemoglobin in the blood is about 30%.

Hemoglobin does not take up oxygen at low Po2 but as the oxygenation of the pigment occurs its affinity for more oxygen increases. No such increase in affinity is evident from the myoglobin curve. In myoglobin, the haem reacts to oxygen independently. In the case of hemoglobin where 4 subunits are present, acquisition of one molecule of O2 increases the affinity of neighboring haems for oxygen. This cooperation between active sites modifies the binding of oxygen.

# b) Why do animals exhibit differences between their essential food requirements? Where does the absorption of carbohydrates, lipids & amino acids take place in the vertebrate body? Describe the method of glucose absorption

The absorption of carbohydrates, lipids & amino acids takes place in the small intestine.

The method of glucose absorption 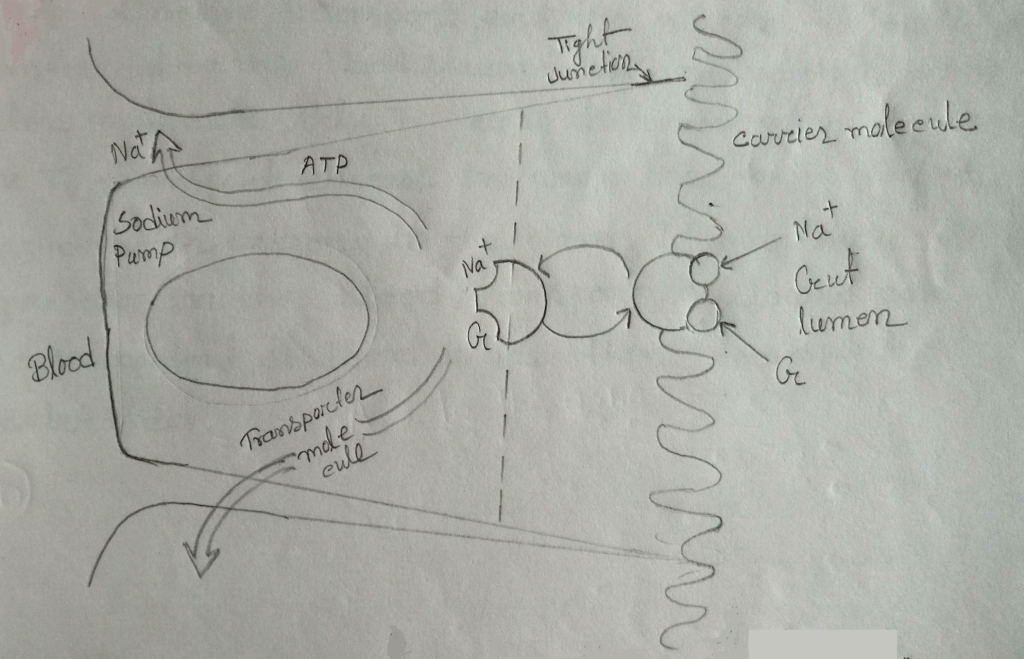 Fig: Mechanism for absorption of glucose

Sugars like glucose are absorbed through special transporter molecules in the membrane of the cell & depend on the Na^+ gradient between the lumen of the gut & cytoplasm of the epithelial cells. The molecule involved in absorption of glucose is known as cotransporter because it couples the transport of a glucose molecule with that of a sodium ion along its gradient. The cotransporter enables cells lining the lumen of the intestine to absorb even quite small traces of glucose from food even though the epithelial cells may already have high concentrations of glucose inside them.

← What are the different records you would maintain in a food service unit? Enumerate. What do you understand by the term 'Fundamental Rights' as given in our constitution? →